In the years that followed, we went through four interns, coped with the death of two animals dearly loved by all at TMI, and this blog gradually degraded from critical voice on corners of the pop culture world both bright and dark, to a YouTube video re-posting machine.

The time has come for The Typing Monkey to turn off the lights (except for the one above the stove), draw the shades and cancel our subscription to Highlights.

As far as we know, former publisher and editor-at-large, S.L. Kreighton has taken a job as a docent in the Chasing Rainbows museum. He didn't even say good-bye. [Curiously, the petty cash box is missing. -- ed.]

Custodian and sometime-contributor, Kris Kendall, has volunteered to auction off the furniture. And should he decide to post anything here, reader, you'll be the only one who cares.

All inquiries may be directed to typingmonkeyATlive.com. Thanks for reading. You've been great. G'night!
Posted by The Typing Monkey at 5:02 PM

It's a dodgy game, declaring your goals toward self-improvement on a night designed for hedonisitc pursuits and letting go of sense. Make any resolutions achievable, but not too easy. You don't want to be patting yourself on the back come February then have nothing to work on for the remaining 10 months.

Happy New Year sweethearts. Take it easy on yourself.
Posted by The Typing Monkey at 4:04 PM

Email ThisBlogThis!Share to TwitterShare to FacebookShare to Pinterest
Labels: pop

Whatever you're celebrating, have a good time and be safe. Maybe you're not celebrating a danged thing. That's okay. Everybody likes cartoons, so let's celebrate the fact that we can watch this obscure bit of Christmas cheer pretty much where ever we want to, whenever we want to.

The National Film Board of Canada has a Vimeo channel. Want to get lost in a land of cinematic wonder, we ask, rhetorically? It's one of the best places on the Web to spend some time being entertained and educated.

Here's a great example of what NFBC does with its money, and reader, we think that's money well spent.


Mr. Frog Went A-Courting from National Film Board of Canada on Vimeo.

And we highly recommend Blinkety Blank by Norman MacLaren (1955).
Posted by The Typing Monkey at 10:26 AM

Read The Guardian's article about the discovery here. And if you want to see this work staged, there's a website detailing the efforts to try to make that happen.

Posted by The Typing Monkey at 6:14 PM

Need a new holiday tradition? Of course you don't. So do this instead:

Get your hands on two science fiction films from the 1950s, specifically, Creature from the Black Lagoon and Monster on the Campus. Then get your hands on a few of your favorite alcoholic beverages. Don't drink yet!

First a few words about these films.

Creature and Monster are united by their director, Jack Arnold. But they're two very different movies. 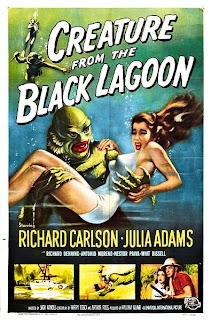 Much like watching James Whale's Frankenstein, any reasonable viewer will root for the monster in Creature. The story concerns a crew of scientific researchers who find evidence of a missing link-type beast, an amphibious humanoid swimming the waters of the Amazon River. The men decide they need to bring the creature -- popularly referred to as the Gillman -- back to civilization for further research.

Naturally, Gillman does everything he can to avoid being kidnapped. Trouble is, Gillman can't stop oggling Julie Adams, the token damsel who enjoys leisurely swims in the Amazon.

About those swims: The underwater photography in Creature is just lovely. Arnold and cinematographer William E. Snyder use the swimming sequences like tension-filled ballets. Creature is fun on it's own, but it's also fun to look at.

Monster on the Campus packs a big mess of fun too, though it's hard to imagine, once you've seen it, that the same man directed this and Creature. The plot of Monster is simple: A scientist studying a coelacanth, the primitive fish long thought to be extinct, cuts his hand on the beast's fangs. Yadda, yadda, yadda, he transforms into an equally primitive primate and proceeds to terrorize various co-eds. 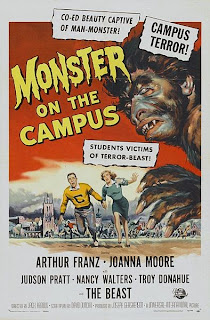 Modern sensibilities may cause us to giggle at Gillman's appearance. But the brute running around in Monster prompts guffaws. He's a sloppy blend of werewolf and Neaderthal. And that's cool. Monster on the Campus never reaches beyond it's B status. Audiences surely laughed when it raged across drive-in screens in 1958.

Now you have the movies and know a little bit about them, what to do with that booze? Reader, you are in for a treat as we instruct you in the ways of Jack Arnold's Double Feature Monster Creature Drinking Game. [caps ours]

Gather some friends and the liquor. Watch Creature first, because it's worth your (mostly sober) attention. Every time Gillman appears and that terrifying blast of trumpets plays, take a drink. When the scientist throws his cigarette into the Amazon, do a shot. Did Julie Adams just scream? Drink. Has she fainted in the grip of Gillman? Shot.

By the time the credits roll, your team will be properly lubricated to take on Monster on the Campus. No rules at this point, just make sure there are some snacks too and craft your own commentary as you go, or maybe try to remember how to spell coelacanth.

Though Creature from the Black Lagoon was released in 1954, the appearance and design of Gillman has become iconic enough that he's often referenced in popular culture as if he were part of the roster of classic Universal Monsters of the 1930s and early '40s.

How iconic? He was painted by the amazing Basil Gogos: 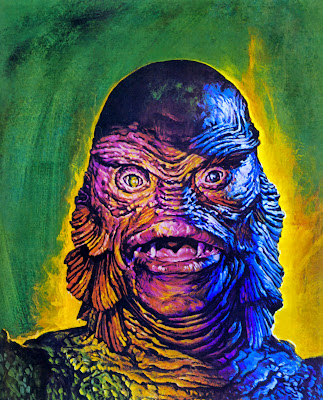 Listen buster, a good article about the less popular creeps from horror writing is not going to escape our attention. Neither will it escape yours. Here's a little taste:

"Next time you need to name check a novel about a prostitute impregnated with the sperm of a hanged man by a mad geneticist so that she gives birth to a vengeful nymphomaniac written by a homosexual Nazi, you’ll be glad we had this chat."

JW McCormack wrote the piece and it taught us several things about monsters we thought we knew, and clued us in to some reading material we are now obligated to seek out.

Read "31 Fairly Obscure Literary Monsters" and chances are we'll be fighting you for the last copy of Ambrose Bierce's The Damned Thing at the library.

Now, look at this cat: 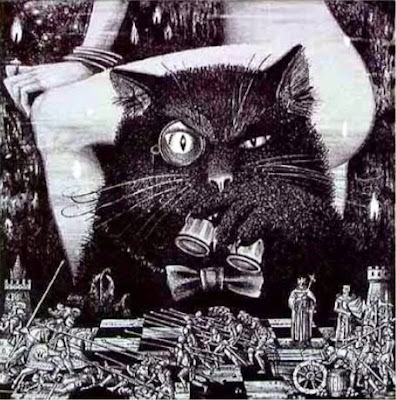 Posted by The Typing Monkey at 5:42 PM